Advertising on billboards and advertising
boards

Home-Oferta-Advertising on billboards and advertising boards

What is a billboard?

One of the commonly known and effective ways to present various types of products and services to a wide audience.This form of advertising is in the form of large-format posters and boards, but it can also be found in smaller versions, e.g. in the form of citylights, usually placed on bus shelters.Advertising billboards are not an idea of our times – the first outdoor advertising of this type appeared on the streets of New York in the 19th century and in a constantly improved version has remained with us to this day.

Advertising on billboards in various forms

It is a very liked and popular form of promotion in Poland and in the world.The large size of the media and the appropriate location make billboard advertisements noticeable from a long distance.What’s more, they allow you to reach a mass audience.Advertising billboards are placed in urban spaces with the highest traffic, as well as on national roads and highways.

A very effective form of outdoor promotion is also advertising on large-format meshes, which will be perfect when a large advertising space is needed to present the product. The overload of information – especially in large cities – will not obscure an interesting advertisement on large-format meshes, so it is worth investing in this type of message.

Advertising on bus shelters will also be effective in the urban space.The undoubted advantage of this type of promotion is the long contact with the advertisement – while waiting for the bus it is difficult to ignore illuminated citylights.In addition, the advertisement on the bus shelters is placed at the eye level of the recipient – close contact with the message makes the message easy to remember. 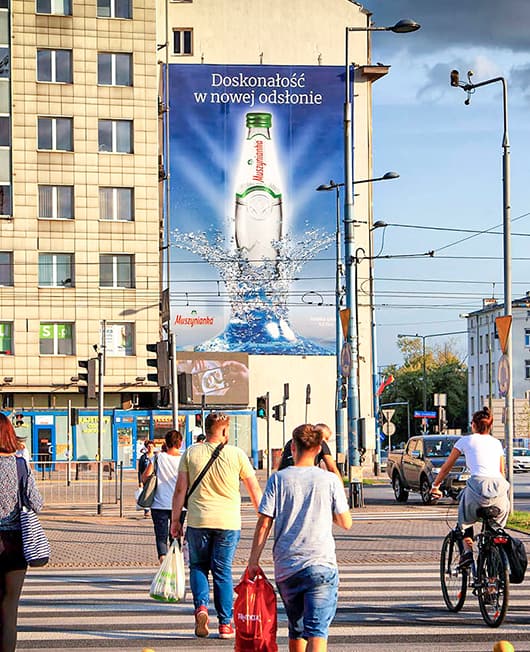 Billboard advertising – who is it for?

Advertising on billboards, boards or large-format meshes will be perfect for small, medium and large companies.It will allow entrepreneurs who are just entering the market to gain recognition, while the experienced ones will strengthen their position among the competition and gain the interest of new customers.Citylight advertising will also be an ideal solution for business owners who plan to stand out in the industry.When the message requires more time and attention to read it, it is worth focusing on advertising in the recipient’s eyesight.The possibility of longer contact with the billboard advertisement – especially when it also contains text in addition to the image – increases the chance that the message will generate interest and even be remembered.That is why advertising agencies often advise their clients to decide to promote their services at bus shelters or in their vicinity.In these places many people spend a lot of time waiting for public transport. Boredom is conducive to suspending your eyesight on a visually attractive and inventive advertisement.

Billboard ads tailored to your audience

Which product or service requires promotion depends on where and in what form an advertising billboard should be placed to be noticed and positively received.City centre or roadsides of frequently used roads? To mount an advertisement on a large-format board or on a building wall?So big that you have to raise your head to see it or such a one that is at eye level?The choice of forms and locations for billboard advertising is undoubtedly diverse, and each of the solutions can be effective, as long as it is adapted to the group of potential customers.Thanks to many years of experience, BE Media knows what a billboard advertisement should look like in order to remain in mind and achieve goals.

Outdoor advertising – what else should you know about it?

The advertisements at stops can be mounted on the rear or side, internal or external surface of the stop pavilion.In this way, they are visible both to people waiting for a tram or bus, as well as to those who pass the stop by car.BE Media offers advertising materials on large posters, enclosed in a glass display case.The large format is clearly visible and legible even without backlight. Advertising billboards are protected with special glass against weather conditions and vandals.

A cheaper way to promote the brand is to use the promotion in the form of stickers, which are placed on the bus shelter.Smaller advertising saves money on the advertising campaign and at the same time successfully attracts potential customers.

Billboard advertising, posted at bus stops, has gained the trust of many advertisers and is good at promoting products and services.It helps to attract new customers, creates a positive image of the company, informs potential buyers about the new assortment.