Do you know that?

Do you know that about 4 billion people travel by bus, tram and metro every year in Poland? An undoubted advantage of advertising in public transport is the wide range of the campaign. Its daily reach can total up to 3 million people. The basic problem every advertiser has to confront is the consumers’ reluctance to advertise. We avoid them if we can. During the advertising block on TV we go out to make a cup of tea, the radio can be easily turned down and on the Internet you can set the plug-in blocking the ads. Standing in a crowded bus or tram we do not have such opportunities. The screen is very difficult to ignore, especially when a large number of passengers prevent us from taking out the book or newspaper. In addition, advertisements are displayed alternately with information from the city life so passengers look at them with great interest. Statistics show that 2/3 of travellers always follow broadcast advertisements and messages.

Outdoor advertising has a huge impact on public space. It is a medium with a significant scale of reaching, so every client is able to come across its message. This is mainly due to its location and the fact that it is “non-switchable”. This makes it impossible to ignore it, on the contrary – it accompanies the customers everywhere and at any time on their closer and further journey. Advertising in public transport deserves special attention and below you can read how it looks in the largest city of Poland, that is its capital – Warsaw.

If to list the advantages of advertising in public transport, it can be said, not without reason, that there are plenty of them. The most important is certainly its wide range, thanks to which the displayed message is able to reach not only a wide, but also diverse demographical, social and age population. Next, public transport advertising means
a remarkably effective message because of its repetition (high frequency of advertising views), and this constant reminder affects effective remembering. As most buses and trams travel on (main) city streets, they are the largest form of advertising and offer the most diverse and creative advertising formats. According to the Road to Enlightenment study carried out by QMedia1, 86% of consumers are able to recall specific bus advertising, and over 50% of recipients can describe in detail the advertisement seen in the last three days. Certainly, this is due to its proximity and the time spent by people in public transport (on average, a passenger travels by public transport about 40 minutes a day). Moreover, public transport advertising covers those residential and commercial areas of the cities that billboards cannot reach. It is known that the consumer is not stationary, so the public transport ads are not stationary either. Public transport goes there, where the people are, and the same phenomenon can be observed all over the world.

Whether it is advertising in/on the bus, tram, at the bus stop or on the subway, through advertising on public transport you can reach millions of customers every day and accurately control the posted messages. Advertisers of the largest European cities, including Warsaw in Poland, are aware of this, especially the transport fleet in each of those metropolises is really impressive.

Warsaw public transport includes primarily trams, buses, Fast City Rail, airport and subway. Buses (with a fleet of 1 500 vehicles) play a dominant role in public transport; they serve over 240 city, suburban and night routes and carry over 42 million passengers each month. Public transport also includes over 420 trams, 48 subway trains in the communication summit (around 600 000 passengers travel by them per day) and SKM – Fast City Rail that takes to work over 65 000 people from different localities around Warsaw every day. In total, more than a billion Warsaw residents and tourists travel by public transport in Warsaw every year2. Advertising in public transport is a guarantee of reaching the customer on
a large scale and at a low cost, that is why it evokes such interest among advertisers. According to the IGRZ (Izba Gospodarcza Reklamy Zewnętrznej – Outdoor Advertising Chamber of Commerce) report summarizing 2018, transit advertising increased by 29% compared to 20173. This growing trend continued in 2019 – the outdoor transit advertising market was higher by another 7.5% for the same company base than in 20184. Where does this success come from? First of all it is the result of innovative and technologically modern approach to the presentation of the advertising message, a very large number of recipients and its wide range.

Immediate availability of the target demographic group, flexibility in advertising message emission and the ability to use non-standard formats (including multimedia spots) make that advertising on public transport attracts unremitting interest among consumers. In addition, due to the possibility of selecting the media carriers, it is also an ideal solution for campaigns with a lower budget.

Advertising on buses and rail vehicles (trams, trains, subways) is extremely effective. It creates countless impressions among pedestrians, drivers, cyclists and commuters. If to add a wide range of small architecture, such as bus stops, train stations, information panels that use the waiting time of passengers, it turns out that transit advertising is a really effective tool for promotion and long-term brand image building. Speaking of advertising in public transport, it is worth noting that it can be placed almost anywhere: inside the vehicle (LCD screens), outside the vehicle (partial and overall wrapping), at stops, waiting rooms as well as at stations and terminals (billboards, digital screens, flags, posters, tower displays, banners, floor graphics).

Customers who see such ads consciously or subconsciously will be subject to a particular brand or its message. The size of the market, unlimited possibilities as to the form, duration of the advertising message and location make that advertising on public transport leads to the desired effect, that is to create a lasting impression and to increase sales.

2/3of travellers pay attention to screens

Advertising in public transport is a great solution for small companies as well as larger enterprises. The structure of the channel is universal which allows the promotion of products and services from various sectors. Its cost is not large and the effectiveness can be huge. All you have to do is to tell us what type of public transport your clients are moving and we will display your advert there.

What we offer? Advertising in public transport is a great solution both for large enterprises and small local businesses. Its cost is small and the effectiveness can be huge. All you have to do is to tell us what type of public transport your clients are moving and we will display your advertising there.

Advertising in metro
The cities where
we place adverts
WarszawaKrakówWrocław 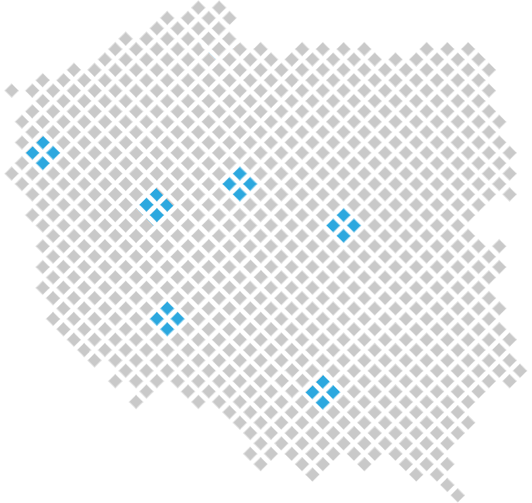