Warsaw is the most developed city in terms of large format advertising. There are more than 30 LED screens in the city whose total coverage is estimated at several million per month. The high reach of the campaign results not only from a large number of media, but above all from the distribution of screens in strategic locations around which thousands of potential consumers move every day. 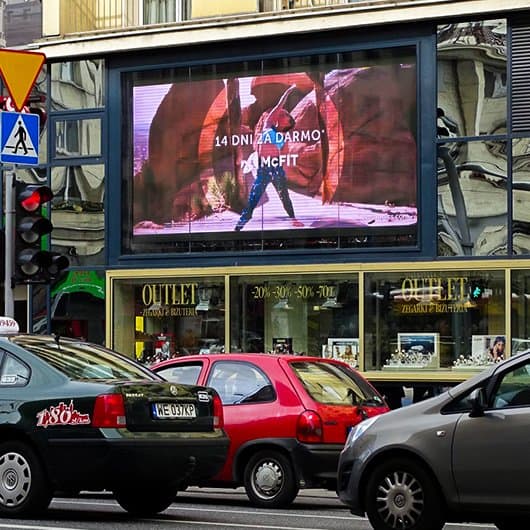 One of the key locations is the intersection of Marszałkowska and Al. Jerozolimskie streets. It is the very centre of the city, and thus the main communication route with several dozen tram and bus lines. In addition, in the area there are shopping arcades, a shopping mall and key tourist attractions that attract crowds of tourists and residents. The screen placed on the roof of Cepelia shop measures 60 square meters and generates up to 8 million contacts per month. When planning outdoor advertising campaigns, you cannot omit multimedia screens in Warsaw, which may be an alternative to traditional outdoor advertising.

The most effective outdoor advertising – a campaign on large screens

Outdoor advertising goes to a very wide audience. LED posters, billboards and LED screens are passed every day by hundreds of people. However, this advertisement on LED screens is by far the most effective form of outdoor advertising. Why? The answer is simple – moving images displayed on large screens are more often remembered – dynamic and colourful spots effectively attract the attention of recipients, and thus potential clients in Warsaw. Video presentations also allow to include much more information than could be found on traditional paper outdoor advertising. This is an excellent idea for promotion both for local entrepreneurs, operating only in Warsaw and its surroundings, as well as for companies with a broader, nationwide range.

LED screens allow to create an attractive, dynamic message that can be one of the elements of an advertising campaign. This innovative form of promotion raises the prestige and recognition of the brand. Paid LED advertising in the city center is a recipe for success – its message goes to a wide audience in Warsaw, including those who are difficult to reach via other mass media – television, the Internet or the press. Do you want to plan an advertising campaign that will succeed? Advertising screens will ensure that your advertisement on LED screens will be visible regardless of atmospheric conditions, and a dynamic and attractive form of communication will allow to acquire new customers easily.